I know this blog post is a bit late, but what with Easter holidays, birthdays (Little man and mine) and sick kiddies, I’ve not got round to writing it up, so here we go! 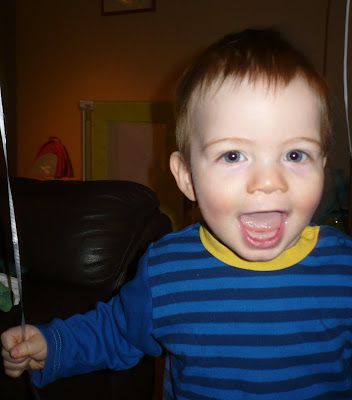 We didn’t want a massive party (not enough room, wouldn’t remember it, trying to sell flat blah blah blah…) but we did want to do something for his first. Little miss had a little family party when she turned one, so we decided to do the same!

The day started like all other birthdays do here, early waking, run to front room to see all the pressies (he had no idea, I’d put them there, but I was still excited!?) and dive straight in! He still hasn’t quite got the idea that he’s allowed to unwrap presents, I suppose after a few months of me telling him “don’t rip that!” he’s a bit confused as to why he’s allowed to do it now, but I’m sure he’ll get there!! To be honest, he was more interested in the two giant helium balloons he had! (Smuggled home the day before and carried round on the back of his buggy without him noticing!) But he got some lovely presents!

We had a fab cake from Waitrose. 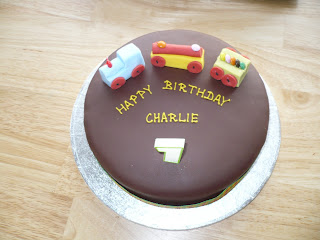 He had two little friends round to celebrate and play with, his gorgeous “girlfriend” and our neighbours little boy, who will both be 1 in June, and his “Bister” and her friend. Afterwards, Nanny, Dada and Aunty Debby came round with MORE presents! I’d asked everyone for clothes as he has hundreds of toys (and yet, is still only interested in playing with my mobile or the tv remotes!?) and its safe to say his wardrobe is now bursting at the seams with fabby things!

I think (hope) he had a lovely day, and although it was more special for us, it was so nice to celebrate such a special birthday, especially after the rubbish start we both had last year.

So, my little man is now 1. He’s not a baby anymore, he’s a full blown walking talking destructive toddler and he cracks me up daily! Both my babies are gorgeous, happy, kind and loving and I couldn’t imagine a moment without them! (ok, well maybe the odd lie in would be nice, but you know what I mean!) 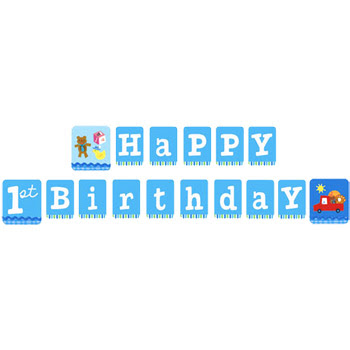 You may also enjoy:

What are you looking for?

Kate is a writer who finds it almost impossible to call herself one & thinks people who talk about themselves in the third person are weird. She finds it practically impossible to take herself seriously. She's 38 and lives in Surrey with her family. She is obsessed with the moon, crystals and recycling & she writes about beauty, interiors and her life as she knows it.