Of course, Little Man and I were very happy to do this!

I love wooden toys, they look a lot better than plastic fantastic toys, and they withstand the bashing and throwing around that toddlers do to their toys.

We already have one Brio toy train, so the Ant was a very welcome addition to the collection!

It came in the post on Tuesday and as soon as it was opened, Little Man was grabbing at the string ready to take it for a walk! The egg spins on top of the ant as its being pulled along, which LM loved, and when he realised this, he was off walking backwards so he could watch it spin! Of course he then realised he could take the egg off, but as its such a good size (no fear of it getting stuck in his mouth or anything) there was no problem with him taking the egg wherever he liked! (So far I’ve found the egg in his highchair, Little Miss’ barbie car, and the change bag!) There is also a springy tail and antenna which he loves to “ping” He even adds his own sound effect, which goes something like “doooooong”!! 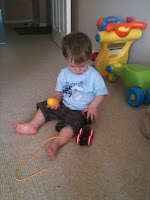 As he is a very active and boisterous toddler, the Ant has taken a few hits since we’ve had it, but its passed with flying colours! It may hit the floor but there is no sign of damage and I think it will last a long time.

The price of the Ant is £12.99 and I would say its a brilliant price for such a well made, classic toy. Its also one of those toys, that, when LM is no longer interested in playing with, will look great on display on a shelf in his room. The colours are classic and look so good, its almost too nice!

I think this would make a lovely present for a toddler, and the parents alike!

This Brio Ant With Egg Pull Along is available from www.hellobabydirect.co.uk for £12.99

You may also enjoy:

What are you looking for?

Kate is a writer who finds it almost impossible to call herself one & thinks people who talk about themselves in the third person are weird. She finds it practically impossible to take herself seriously. She's 38 and lives in Surrey with her family. She is obsessed with the moon, crystals and recycling & she writes about beauty, interiors and her life as she knows it.